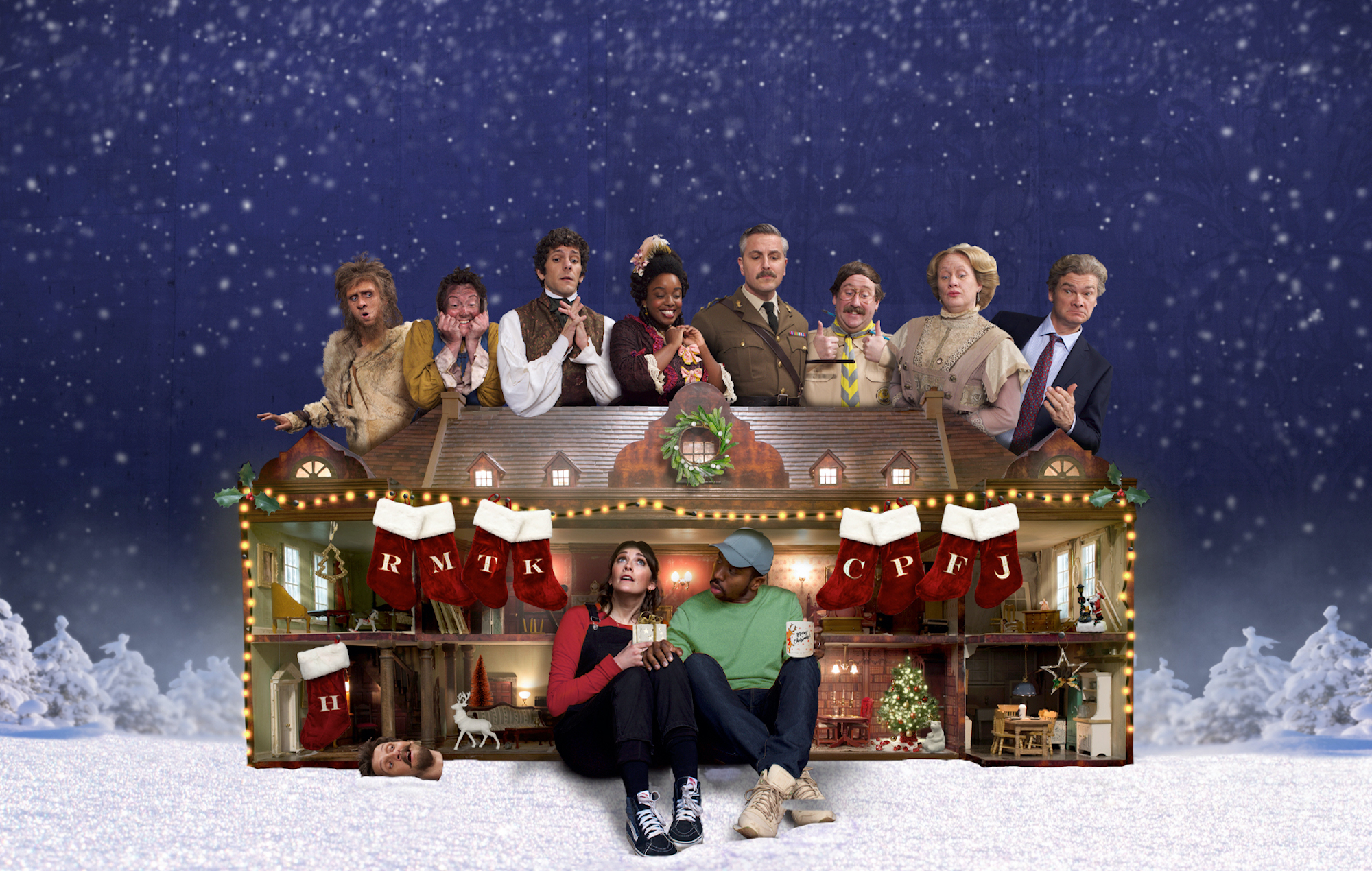 Despite Christmas 2020 being like no other, some of us will still be spending it like any other – stuck in a house with a bunch of reprobates you haven’t been able to escape from all year.

The Ghosts Christmas special will be no different. The spooktacular hitcom, in which Charlotte Ritchie’s Alison is plagued by a mansion full of historical spectres, follows its 2020-saving second series with a festive episode frankly stuffed with Christmas spirits. What ghoulish gaggery has it got in store?

We asked Kiell Smith-Bynoe, who plays Alison’s surprisingly understanding husband Mike, and Ben Willbond, one of the writing team and the man behind the moustache as the deeply closeted Captain, to visit us with the Ghosts of Christmas future…

“Mike’s family come and visit the house for the first time,” Kiell reveals, “so we have a lot going on there with the ghosts around and Alison dealing with their needs but Mike also dealing with the needs of his family, who have come to his house but are still treating him like the kid, because he was the baby. There can possibly be a lot of questions about Mike’s history because in the first episode of series one we find out that Alison doesn’t have any family but we never really reference Mike’s family. Now we finally get to meet them and see how he reacts around them, especially at Christmas when the pressure’s really on.”

We get the impression that family Christmas is a bit of a struggle for Mike. “Yeah. His intention is that it’s not going to be a struggle at all, but they have different ideas.”

“We hadn’t really tackled Simon [Farnaby]’s character Julian,” says Ben. “We’d given little snippets of his past but we wanted to do something about the importance of family and how hard it is at Christmas sometimes. We had a lot of fun digging into Julian’s past. I’m desperate to do a more dedicated Julian episode where you see him gadding about town and being a really awful ‘90s politician but obviously we’re restricted to our location and budget. We didn’t know at all how much that theme of family would resonate now that we’re in lockdown. We certainly happened on this Christmas theme of the importance of getting family together when so many people won’t be doing that this year, it’s quite moving.”

Was it a relief for Simon to wear trousers for some of the Christmas episode filming? “It was, yeah. He said ‘it was a really weird sensation, I kept thinking something’s wrong, then I realised I’ve got trousers on’.”

“I was quite up for it,” says Ben, `”and the fact that we call it ‘The Ghosts Of Christmas’ is a nod. It is the most compelling Christmas story, really. We to-and-fro’d on it a lot and thought ‘let’s nod to it but let’s not go there because everyone else has been there’. We can’t avoid that comparison but all the characters have still got journeys to go on, so we thought ‘let’s just do what we do – let’s take those Christmas values but not go too far with it.”

The greatest gift we’ll get next year is series three

“We’re pretty much done, we’re tightening the scripts now,” says Ben. “There are still a couple that need a bit more work, but we’re on the cusp of pre-production, so we’ve got everything pretty much in a place to start. There’ll be more back-stories, more intrigue with Mike and Alison. I can’t spill any more beans than that.”

“I’d like to see more of Mike and Alison’s friends and I’m hoping for another ghost,” says Keill, who’s yet to see any scripts. “And maybe on location, maybe Mike and Alison get to go on holiday.”

With any luck covid won’t affect filming, but Ghosts can take a long time to make anyway. “It definitely takes a lot longer than other things,” says Kiell. “We can be doing a scene for a day. If we’ve got a scene with all of the ghosts and Mike and Alison, that’s eleven actors – we’ve got to shoot it with the ghosts and without the ghosts, so that was all very new to me, and very exciting. It was also a test of my acting skills to be able to ignore everyone around me. In between takes we’re laughing and joking and messing about and when action is called I’ve got to not see them.”
Series three is written as though it may be the last
The show is the result of the team behind Horrible Histories, Yonderland and Shakesperean film Bill chucking ideas at the BBC until they became possessed by Ghosts.

“We really were trying to come up with a decent group show that we could all do together and that would be like a gang show,” says Ben. “There were so many iterations of various thing, set in space, in medieval times, there was quite a lot that we went through and this ghost idea had been floating around, if you’ll forgive the pun, for a while and we just came back to it because it seemed like a really good fit.”

“When we hit on the fact that we’d all be from different periods in history, that played into what we’re known for. It excited us that we could play characters with different attitudes, it gave us an immediate character hook – somebody from Tudor times is going to have very different views and they probably wouldn’t change. It was a good fit as well because it felt like a good way to do a flat-share comedy with a whole bunch of people, giving you an excuse for a whole bunch of people to live together in a house without being able to go anywhere. It’s a natural comic ‘sit’.”

Everyone involved with the show has been taken back by the response. “I was really surprised at how it had such a massive fanbase,” says Kiell, “especially with all the fan art and all the fans on Twitter are really behind the show. It’s rare in a comedy that every character is really funny in their own way, and has their own voice. Usually there’s some straight characters that are just there to play off, but with this everyone was really funny, especially Mike and Alison, who would usually be the ones that were just reacting.”

Yet, with no guarantee of a fourth series, the writers have approached series three as if it may be their last. “You start these journeys and they have to come to an end at some stage,” says Ben, “but you’re always running that fine line between desperately wanting to tell the stories but not tell them too soon, and then you don’t know if you’re going to get the chance to do any more, because the BBC are not suddenly going to turn round and go ‘have 15 more series!’ So you’re kind of like ‘what happens if it is the last one?’”

When you’ve got an instant classic, is it tempting to do a Fawlty Towers and quit after a few series?

“Yeah, you don’t want to overdo it,” Ben says. “We did have that conversation, ‘do we run the risk of doing a Breaking Bad on this and it runs for too long?’ But there are so many stories, that’s the joy of having these characters with hidden histories, there are so many stories to tell, and Mike and Alison’s story as well, there’s still a lot of road there. I don’t feel that we’re running out of that road yet.”

The Ghosts Christmas special airs on BBC One at 8.30pm on 23 December

The post What we can expect from the ‘Ghosts’ Christmas special (and series three) appeared first on NME | Music, Film, TV, Gaming & Pop Culture News.