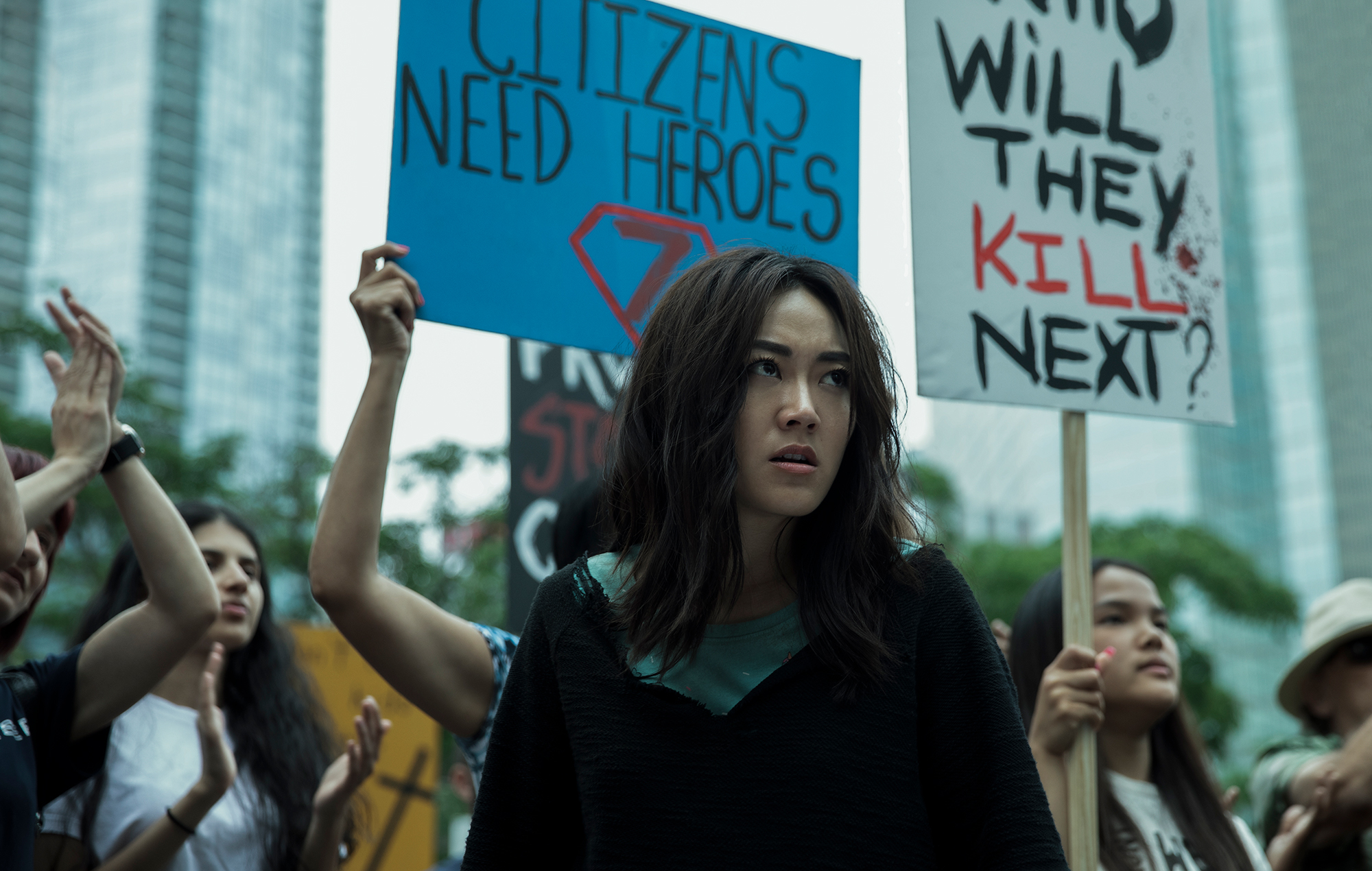 This episode of The Boys (season 2 episode 4) is the fourth of the series, marking a halfway point for this second batch. In terms of pure action, it’s a slower affair than before – there’s only so many exploding bodies, buildings and giant whales you can process before it all gets a bit much. But from a plot perspective, the show is as busy as ever, from fake-outs (Madelyn Stillwell is alive! Except, just kidding, she’s not!) to romantic entanglements (Hughie and Starlight! Butcher and Becca! Frenchie and… Kimiko? Er, no thanks) to line-up changes for The Seven (see ya, A-Train!) and major revelations (Compound V has officially reached the public eye). Here are the highlights from ‘Over the Hill with the Swords of a Thousand Men.’

As mentioned, this was a relatively quiet week compared to the usual buckets of blood and guts. The most upsetting violence is a glimpse of a mutilated face shown in flashback, as a reclusive Black woman recounts to Hughie (Jack Quaid), Mother’s Milk (Laz Alonso), and Starlight (Erin Moriarty) how her brother was targeted and murdered in cold blood by a “second-tier” (and since vanished) superhero named Liberty back in the ‘70s. Then comes the not-quite-shocking twist: Liberty (who Hughie and M.M. have been tipped to investigate) isn’t so much vanished as she is actually new Seven sensation Stormfront (Aya Cash), who, as you might have gathered from her wanton murders in the previous episode, is also a racist. In public, Stormfront continues to play the part of the iconoclast, calling out Vought on her social media feed while revealing to Homelander a deeply Trumpian strategy of grabbing power by stirring up anger. You don’t need to capture a majority’s attention or affection to command attention, she explains: “You need five million people fucking pissed.”

This season has not lacked for obvious needle-drops, but give The Boys some credit for leaning into the Billy Joel obsession that Hughie has nursed since the pilot. This week’s Joel cut is ‘We Didn’t Start the Fire’, which Hughie, M.M. and Starlight hear on the car radio during their road trip to investigate Liberty. If you didn’t know, that particular track is from Joel’s 1989 album, interestingly titled ‘Storm Front’. Hmm, wonder what that could mean?

Hughie moons over Starlight regularly, but he’s rarely looked quite as smitten as when she’s singing along to one of the worst Billy Joel songs. Naturally, this leads to them finally rekindling their relationship, with some illicit late-night motel sex following a brief debate about the worst candy bars (turns out Starlight loves Bit-o-Honey).

Doppelganger (previously used to blackmail a senator back in season one) reappears in one of the episode’s most disturbing scenes, when he morphs into Madelyn Stillwell (Elisabeth Shue, back for a bit) in an arrangement with Homelander (Antony Starr), to recreate his relationship with Stillwell and tell him everything he wants to hear – in addition to feeding him milk and watching Taxi Driver together on a couch. It ends badly for Doppelganger, the final casualty of the episode when Homelander decides that he doesn’t need his shapeshifting mothering anymore. In other hero news, Shockwave reappears – for just enough time to replace A-Train (Jessie T. Usher) in The Seven, much to his chagrin. It’s yet another move by a power-hungry, rampaging Homelander, who also assaults Starlight in an elevator at the Vought offices, threatening to kill her for not zapping Hughie last week and outs Queen Maeve (Dominique McElligott) as gay on national television.

This week’s biggest question: what’s next for Butcher?

Finally, given Becca’s secret-compound location, Butcher (Karl Urban) goes face-to-face with his estranged-against-their-will wife Becca (Shantel VanSanten). Big episode for reunion sex, then, though unlike Hughie and Starlight’s tryst, the afterglow for this one fades pretty quickly. Butcher has always seemed driven by his desire to avenge his wife, but now he’s found out she’s alive, and parenting Homelander’s son, with unwanted regular visits from the dad. The desire for revenge is still there, but what’s his next move, given that he can’t spirit Becca away without attracting the immediate ire of the all-powerful Homelander?

Butcher also frays his relationship with Becca further by disparaging the “supe freak” son who’s the reason Becca won’t just leave with him at any moment. Butcher has typically been the figure driving the Boys forward recklessly. With Becca located but immovable and Homelander looming over everyone, he may need to find a different path forward. He has that in common with Kimiko (Karen Fukuhara), who approaches Stormfront at a rally, intending to exact revenge for the murder of her brother. In the end, she hesitates and doesn’t get her chance before Stormfront makes her exit. The Boys’ grudges against the remaining members of the Seven are building, without a clear path forward in sight.