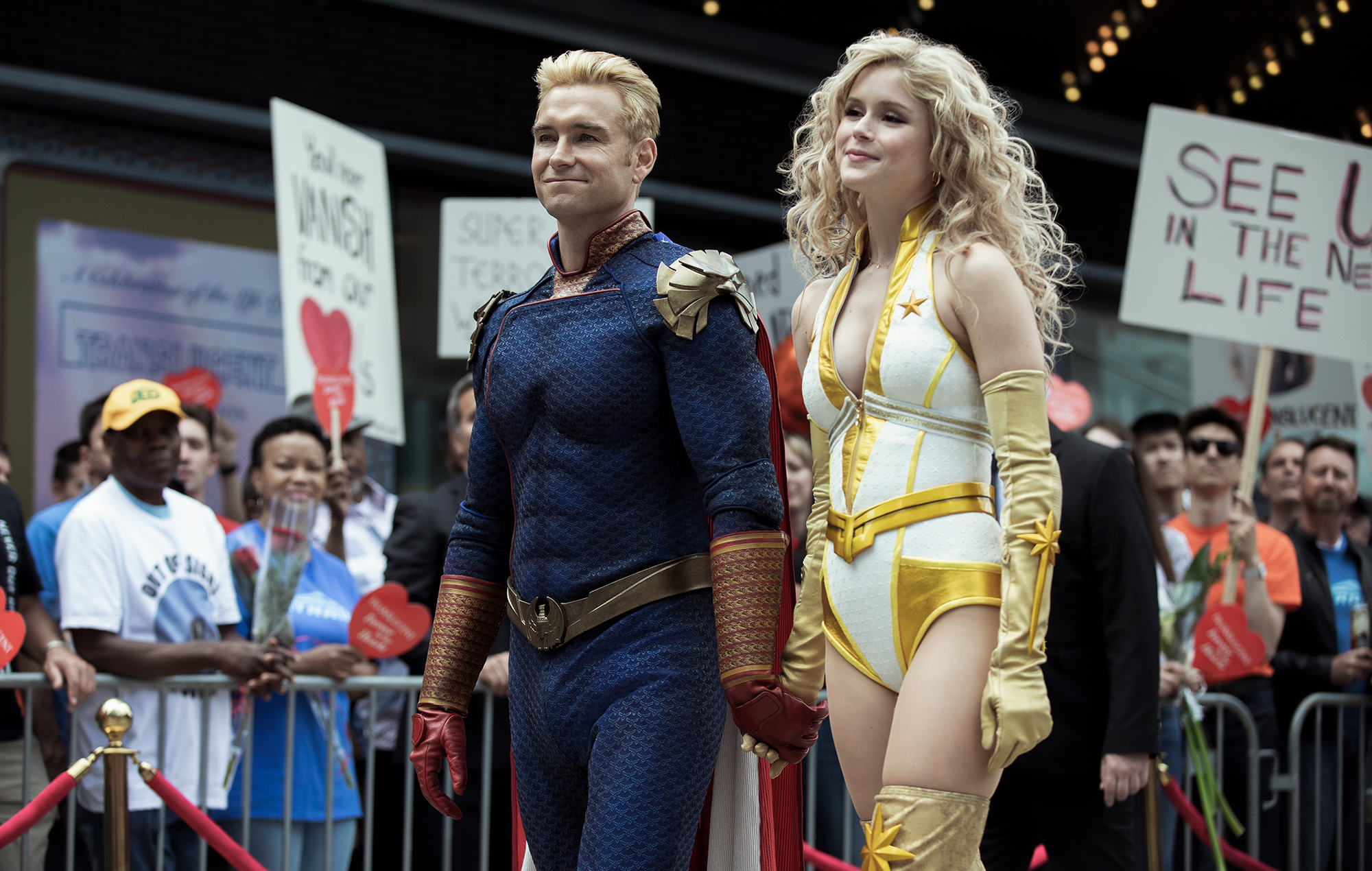 If you hadn’t noticed, the Boys (that’s Hughie, Frenchie, Mother’s Milk, Kimiko and Butcher) haven’t actually been, er, back in town this season. In this week’s instalment (The Boys season 2 episode 5), our fave anti-super vigilantes still don’t share any scenes all together, but it feels like they’re gearing up for a reunion.

Once again, Hughie and M.M. go on a mini-mission together, while Frenchie and Kimiko continue to wrestle with her grief and anger. Though this is a fairly Butcher-heavy episode – it’s easy to tell based on how many times he gets to say the c-word – lots of the biggest moments, as ever, belong to the corrupt wheelings and dealings of the current, former, and soon-to-be-former members of The Seven. So let’s get right to it. Here are the highlights from ‘We Gotta Go Now’:

Guess who's coming back next week to #TheBoysTV

Kimiko (Karen Fukuhara), still struggling with the death of her brother at the hands of Stormfront, is doing hit jobs, which involves knocking off Russian gangsters (including a particularly unlucky fellow who gets his face torn clean off). Later, Frenchie (Tomer Kapon) tries his best to bring her back to the kinda-mostly-good side; it’s left hanging whether she’s open to it.

No Billy Joel for Hughie this week, but Butcher (Karl Urban) gets a couple of hair metal musical moments to accompany his despair and eventual resolution. At first, he’s seen drunkenly picking fights in a club’s mosh pit, trying to numb the pain of Becca (Shantel VanSanten, absent for this episode) choosing to stay in Vaught captivity with her supe-son.

Butcher later decamps to a family member’s house in the suburbs, where he reunites with his dog and lays low – until a couple of the Boys show up to retrieve him, around the same time as the ever-masked, ever-silent, ever-menacing Black Noir (Nathan Mitchell) comes on the scene. After some scrambling and a confrontation defused via last-minute blackmail, Butcher and his mates free themselves from Black Noir’s clutches while the slow-building intro to Aerosmith’s ‘Dream On’ fills our eardrums. The song continues to build for a postscript of sorts, featuring Homelander (Antony Starr) and Stormfront (Aya Cash) celebrating their alliance with a sex montage that crosses the lunatic coitus scene from Zack Snyder’s Watchmen with the Superman/Zod fight in Zack Snyder’s Man of Steel. A bit derivative, perhaps, but one of the show’s most genuinely intriguing takes on the weird kinkiness of superheroes.

Speaking of Zack Snyder: throughout the episode, Starlight (Erin Moriarty), Queen Maeve (Dominique McElligott), and secret white-superhero supremacist Stormfront shoot scenes for their Dawn of the Seven feature film, footage of which is shown in patented saturated-but-color-drained SnyderVision, complete with a hard-wink line of dialogue about how “this new Joss rewrite really sings, huh?” The real-life supes shooting this imitation of their adventures feel about as warmly toward the movie as Snyder did toward the Whedon polish on Justice League. Everyone involved seems to feel uneasy about the parallels with their real lives: A-Train tries to leave his exit from the team, now scripted into the movie, with no success; Maeve bristles at her recent (and involuntary) coming out being mined for a Disney-style “gay moment” (minus actual kissing of course) in the film. But she tips her hand to once-and-future girlfriend Elena (Nicola Correia-Damude) when discussing reasons for going along with this newest PR campaign. “We’re gonna take [Homelander] down,” Maeve whispers, only there’s another euphemism subbed in for his name.

The week’s biggest question: what’s the plan to take out Homelander?

Homelander has a big week for his brand of barely-concealed disgust for all of humanity: After a particularly cavalier bout of his “terrorist”-fighting is captured on video, his polls fall drastically, sending him into damage-control mode. Another big question this episode raises: has it really taken this long for Homelander’s murderous antics to be captured clearly on a cell phone? He crashes a protest, grabs a mic from a congresswoman clearly modelled on New York’s Alexandria Ocasio-Cortez, and goes way off-script trying to excuse his own terrible behaviour.

Later, in the episode’s most up-to-the-minute plot turn, Stormfront comes to the rescue with some slyly faux-populist memes designed to stir up the world’s most thoughtless Facebook users. Sure enough, it works, bouncing Homelander’s polls by several points (hence the acrobatic sex.) But with Butcher getting his groove back, Starlight ready to fight back, and Maeve quietly on the warpath (and possibly recruiting an ousted Deep from his Scientology-like cult), the real question is whether Homelander will come under fire from all sides, or square off against an eventual team-up.