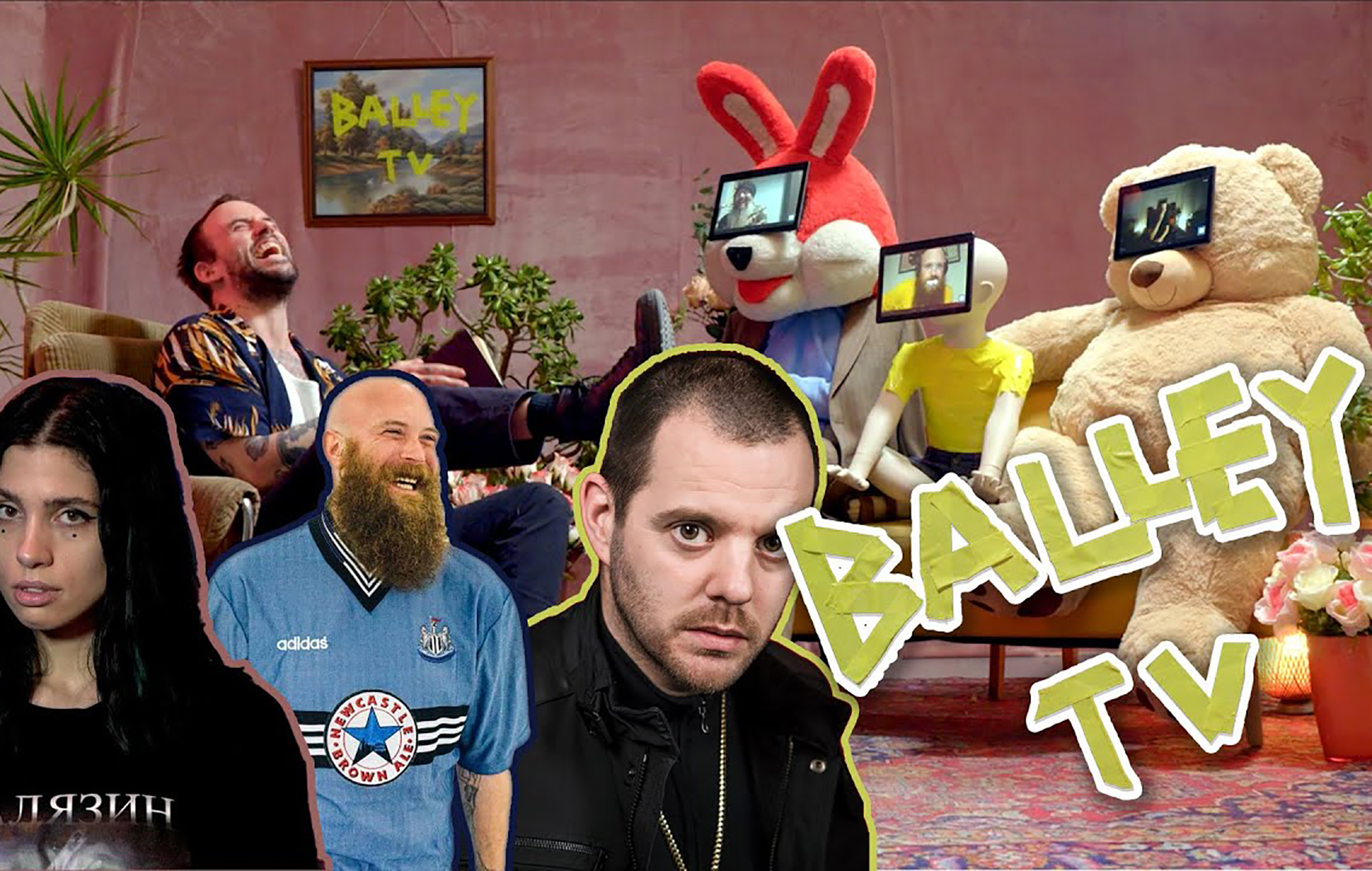 Enough with the moist-eyed bedroom livestreams. Artists are desperate to keep on gigging throughout lockdown, but there’s something about seeing your favourite singer-songwriters’ floral IKEA duvet cover in the back of their shot which takes away the magic. It’s sweet, sure, but it’s definitely not the same as a night at a show. Instead, I’m here for musicians who have pivoted to something a bit different, like IDLES’ frontman Joe Talbot, who’s used a global pandemic as an excuse to become a talkshow host, pitching himself somewhere between Jerry Springer and Iggy Pop. But, like, from Bristol.

Balley TV is stupid, clever, weird, wise, rude, sweet, mindless, thoughtful, totally baffling and absolutely hilarious. Think a punk rock version of BBC’s flagship daily dose of inanity, The One Show, and you’re almost there. On Balley TV, discussions flip from various members of IDLES’ fondness for hard drugs to diversity within the music industry to a guest pissing in a bottle rather than nipping to the loo to white privilege at the drop of a hat. “Free therapy? Virtual pub? Watch Balley TV and you won’t learn a thing,” is the show’s tagline, but it’s only half-right. Here’s some of the stuff that we did learn after watching the first four episodes. Here’s to a bunch more.

The guests are perfect

So far Joe’s welcomed a flawless selection of guests, including Arlo Parks, Nadya from Pussy Riot – whose demonstration of a death metal howl is one of the show’s many highlights – Hak Baker, Kate Tempest, Billy Bragg, Lauren from Chrvches, Mike Skinner from The Streets and Kenny Beats. Of course, this being 2020 – aka the year of absolute mayhem – these guests don’t actually come into the studio, but appear via video link, their heads wobbling around on an iPad which is stitched into the head of a selection of somewhat terrifying, massive cuddly toys. Which brings us to….

The set is brilliantly weird

In a beige corduroy easy chair – a bit like something your favourite nan might have – Joe hosts the show from an intense, pink-painted, plant-covered, swirly-carpeted set that, if it was your own house, might drive you mad within minutes. In the context of Balley TV however, the 1970s themed set works a treat. It also makes the giant soft toys on the sofa that are standing in for the guests seem slightly less disturbing… slightly.

The tone is spot on

Just like how The One Show can casually pivot from a piece about a group of perky young beekeepers to a short segment on an axe murder, Balley TV constantly switches from the lighthearted to the actually quite serious. But in Balley TV’s case, it never seems strange or off-putting. In fact, it’s the lack of fuss made over such topics as the role of airing your politics in your music and how to use your privilege that makes the discussions on the show so accessible. During an eye-opening chat with IDLES’ own Mark Bowen and Arlo Parks, Billy Bragg goes deep into his own ideology when it comes to mixing pop and politics. “It’s not the role of the artist to change the world,” he reasons. “It’s the role of the audience to change the world, it’s the role of the artist to wind them up to do that.”

Episode One sees Dev from IDLES – who has also been streaming his own workout sessions from home elsewhere online – tell all about his totally-above-board-honest recently dabblings with the dark web. “It’s very user friendly, who’d have thought it!” he says, in a highly entertaining breakdown of the hinterlands of the internet. Cue an entertaining story about a friend of Mike Skinner’s, who would now be a millionaire if he’d have kept his £100 of bitcoin instead of buying cocaine with it seven years ago on the dark web. “Is there anything on there that’s not hitmen, credit cards and stimulants,” asks Skinner. “I can just imagine a florist on the dark web going ‘what the fuck, why is nobody buying these flowers!’,” offers Talbot.

This week on Balley TV!Lauren Mayberry (CHVRCHES) introduces Joe to 'a pint of shite' and Hak Baker tells us all his biggest regret!Episode 2 out now on Youtube!https://m.youtube.com/playlist?list=PL1h1aQTAqESvkKNehOAYZny6JVQoCcM_c

The Balley TV format involves a fun-for-all-the-family game in which Talbot asks a guest to answer 10 ludicrously impossible questions, stuffing one marshmallow in their mouth for every right answer and two for every wrong answer. It normally ends up in vomiting. In other gross-out news, Hak Baker admits halfway through his episode that he’s pissed into a beer bottle rather than taking a loo break.

The post Joe from IDLES’ talkshow is a wayward, punk rock version of ‘The One Show’ appeared first on NME Music News, Reviews, Videos, Galleries, Tickets and Blogs | NME.COM.