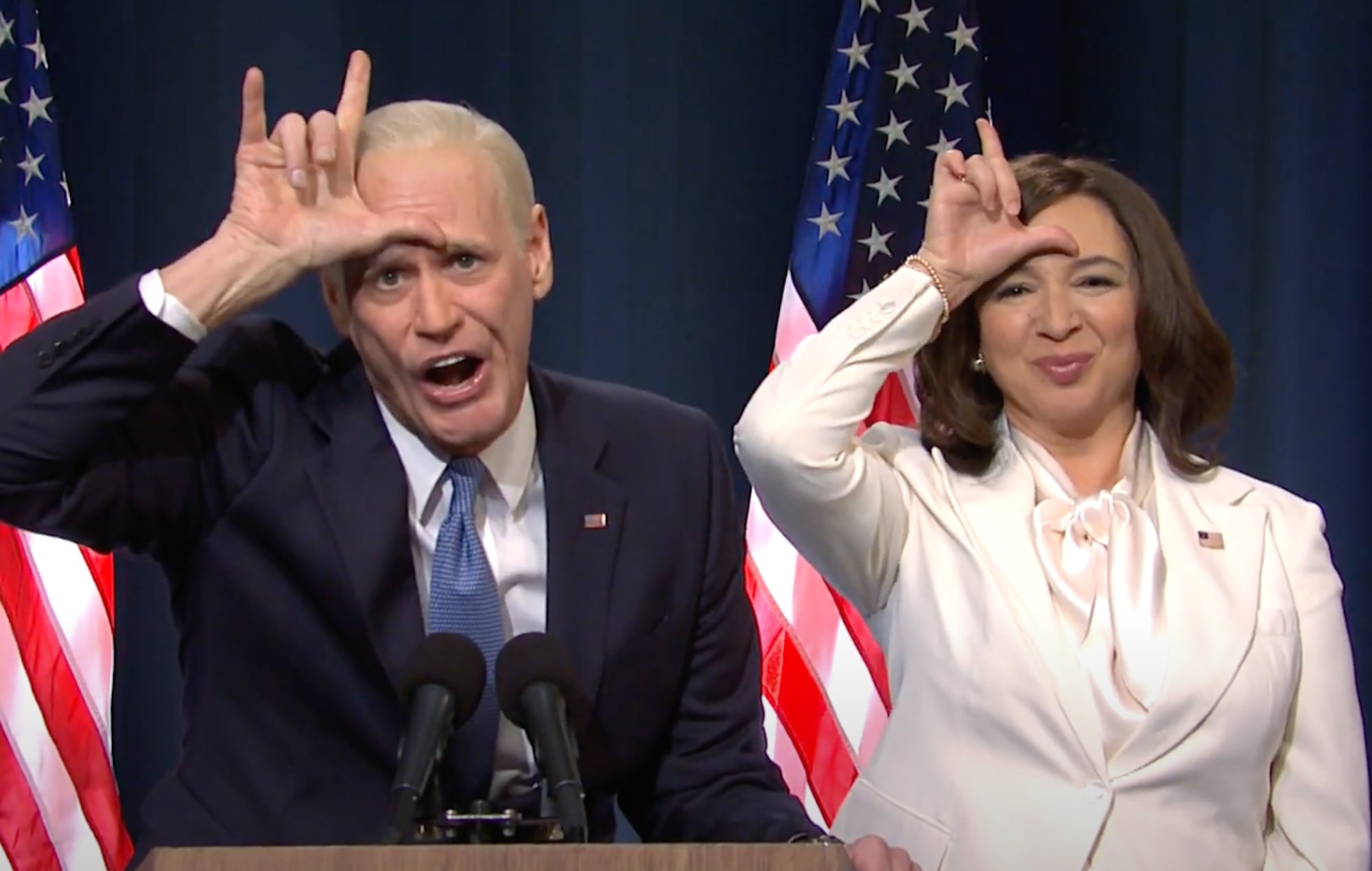 SNL, in its job as a satirical sketch show, often reflects the feeling of America as it skewers topical issues and the nation’s leaders. Four years ago, comedian Dave Chapelle hosted the programme for the first time, days after the 2016 US presidential election. The mood that weekend was sombre – despite winning the popular vote, Hillary Clinton had lost to Donald Trump and a presidential term of hate, division and self-interest lay ahead.

Back then, the show reflected the US’ response to his victory by delivering a cold open devoid of gags. Instead, Kate McKinnon’s Clinton delivered a moving cover of Leonard Cohen’s ‘Hallelujah’. “I’m not giving up and neither should you,” she said after the last notes rang out.

When Chapelle returned to SNL last night (November 7), it felt like the world could take at least a breather from sticking by that sentiment. Trump is on his way out at last, to be replaced by a much kinder, more empathetic leader in the Democrats’ Joe Biden. The streets of America are awash with scenes of jubilation and celebration. That’s exactly what SNL conveyed, mirroring an election response like no other. Here’s how they did it.

A star-studded but humble cold open

Last night’s cold open reflected many people’s reality over the last few days, the SNL cast giving their own take on CNN’s powerhouse newscasters running on very little sleep and, in the case of John King, fingers that have been worn down to nubs from excessive use of the “magic wall”. After a fictional calling of the presidency for Biden, they cut to Jim Carrey and Maya Rudolph as the President-elect and Vice President-elect, who – between the jokes – had a powerful message.

“I am humbled and honoured to be the first female, the first Black, the first Indian-American and the first bi-racial Vice President,” Rudolph’s Kamala Harris said. “And if any of that terrifies you, I don’t give a funt.”

“Exactly,” responded Rudolph. “I’m just going to play a quick song on my phone.” She then played viral song ‘Lose Yo Job’, which South Carolina woman Johnniqua Charles sang while being detained by police in June.

If the use of a piano in 2016’s cold open moved a country to tears, this year it likely moved it to laughter. After Biden and Harris’ conference, SNL’s CNN cut to Alex Baldwin as Trump giving a typically lie-filled speech before heading to the keys for a tender snippet of Village People’s ‘Macho Man’.

If you were hoping Chapelle’s monologue would go after Trump in its entirety, you will have been disappointed. But the comedy star’s opening remarks subtly linked back to this historic election, with him first ruminating on his great grandfather, who spent 10 years of his life as a slave.

Later, he shared a text from a friend in London who told him the world felt safer with Biden as President. “That’s great,” he replied. “But America doesn’t. You guys remember what life was like before Covid? I do. There was a mass shooting every week. Thank God for Covid – somebody had to lock these murderous whites up and keep them in the house.”

Like Biden and Harris in the cold open, Chapelle urged those celebrating to “remember it’s good to be a humble winner”. Remember when I was here four years ago?” he said. “Remember how bad that felt? Half the country right now still feels that way. Please remember that.”

“I don’t know if anyone noticed or not, but Joe Biden has been elected the 46th President of the United States,” Colin Jost said at the start of this week’s Weekend Update segment. Footage from street parties and mass gatherings around New York flooded the screen as Jost reminded viewers this was Trump’s hometown. “Can you imagine you get fired from your job, you go back home and everyone in your own house is like, ‘Boo, you suck!’?” he joked.

Jost and co-host Michael Che often come across as two friends catching you up on the latest news down the pub – albeit with a lot more wit and storytelling skill than your mates – and this week was no different. Their mood was as ebullient as your average left-leaning person’s is right now, Che sipping on what looked like whiskey and the pair growing giddier as the segment progressed.

“Ever since Biden won, everything I was worried about or mad about just sort of faded away,” shrugged Che at one point. “I mean, the problems are still there but remember that Shawshank scene when the dudes are drinking beer on the roof? They were still in prison but for one day everything just felt OK. That’s how I feel right now and I’m so relieved because, if Trump won, I thought there’d be a race war and, Colin, you don’t know this but me and my friends were going to kidnap you.”

Trump gets the OJ treatment

Trump finding himself compared to OJ Simpson is nothing new. His former Communications Director Anthony Scaramucci made the comparison in 2017 while the press has discussed some apparent similarities between Simpson’s trial and Trump’s impeachment. SNL took things one step further in one sketch the sketch DC Morning. In it, they built yet another news studio, with hosts Ego Nwodim and Chapelle bringing the breaking news that Trump was in the middle of a police chase from a white Ford Bronco.

As footage from Simpson’s actual police chase played, a “911 call” from Donald Trump Jr was aired, with the President’s son trying to bargain. “You gotta tell the police to just back off,” he said. “Tell them to stand down or dad officially starts the campaign for 2024. My father has the announcement tweet ready to go, he just needs to push one button.”

“You hate to see it,” Chapelle said sagely afterwards. “But more than that, you love to see it.” We couldn’t agree more.

The musical guest on tonight’s episode of SNL was Foo Fighters, whose main purpose on the show was to premiere their new single ‘Shame’. But as the episode came to an end, they returned for another performance – this time of their classic track ‘Times Like These’. It was a version unlike any we’ve heard before, the Dave Grohl-led band slowing and quietening things down until after the second chorus, really letting the power of the lyrics shine through: “It’s times like these you learn to live again.”

Even if you’re not a fan of the Foos, it was hard to keep a dry eye watching such a fitting performance for this moment, which served as a reminder that the light has finally broken through the darkness once more.