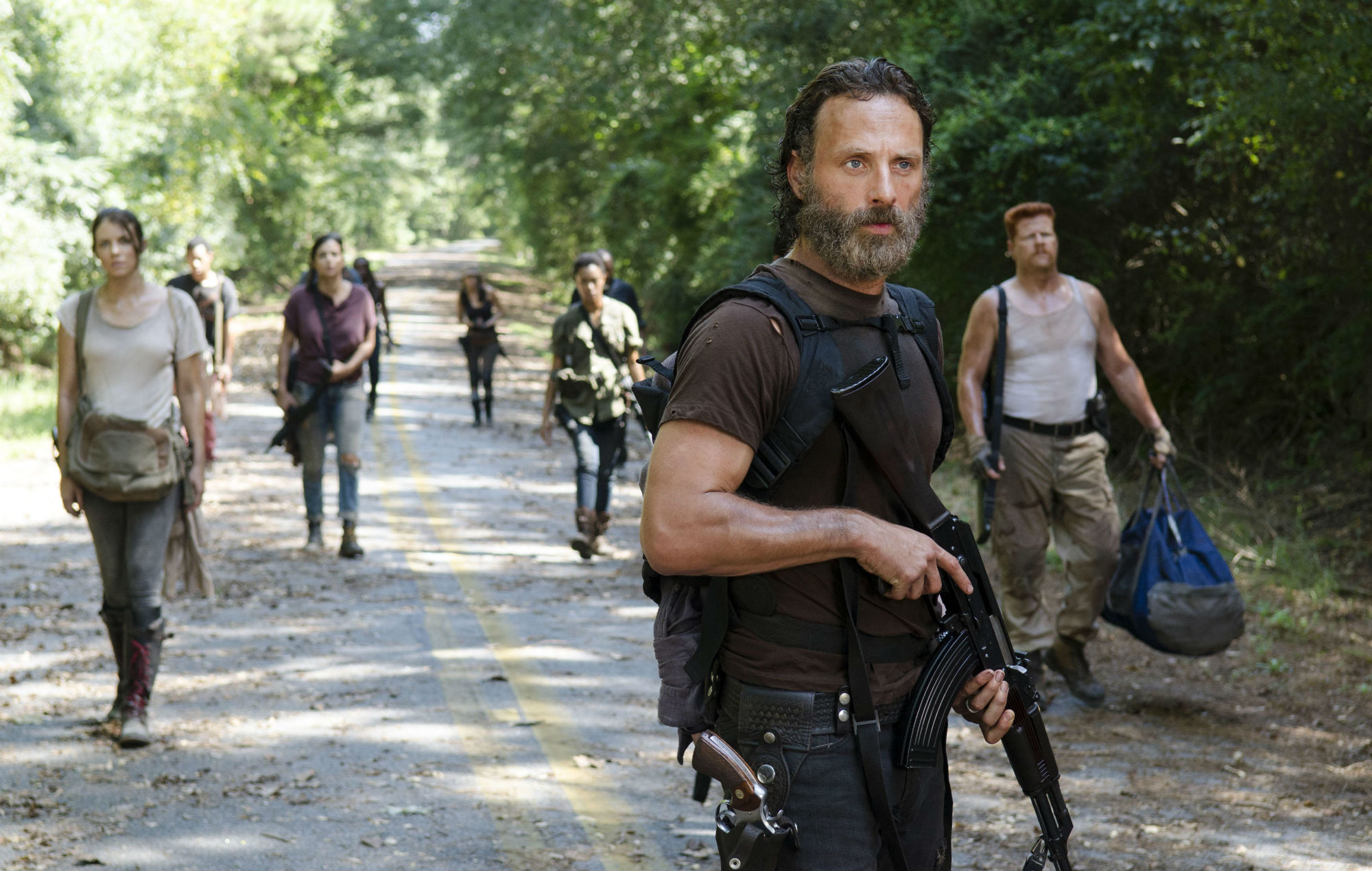 This Halloween will mark 10 years since The Walking Dead’s US premiere, and, 146 episodes on (soon to be 147 once the coronavirus outbreak eases enough to allow the completion of the season 10 finale), there’s still life in TV’s foremost zombie dystopia yet. While many former and current fans of the show will likely acknowledge that its halcyon days (and accompanying sky-high audience ratings) are but a fading memory, full credit should still go to current showrunner Angela Kang for reviving’s The Walking Dead fortunes by delivering a fresh take and a story to truly invest in with seasons nine and 10.

As the series staggers on towards that decade milestone like a member of Beta’s horde of walkers, now feels like a good time to assess and reflect on the comic book adaptation’s finest on-screen moments. Here’s NME‘s verdict, then, on the 10 best episodes of The Walking Dead.

The brutality of Alpha and her Whisperers is fully realised in season nine’s finale-like penultimate episode ‘The Calm Before’ as 10 — count them, 10 — of our good guys are murdered by the skin mask-wearers. Hats off to the showrunners for executing one of the strongest Walking Dead twists yet (with the show deviating from the source material of the comics in selecting its victims), turning what started as a good day for our survivors at the jolly Kingdom-hosted fair into one of their worst yet.

Alpha’s villainous tenure on The Walking Dead ended as Negan triumphantly rolled her decapitated head to Carol, also bringing to an end the emotionally draining ‘Walk With Us’. Diving straight into the Lord of the Rings-style assault — albeit with walkers instead of orcs — on Hilltop, regular Walking Dead director Greg Nicotero rarely lets up the intensity as we breathlessly witness Gamma/Mary valiantly trying (in vain) to bring down Beta, a mortified Judith having to put an end to a reanimated Earl and, of course, Negan’s ultimate deception of the previously unflappable Alpha. A knock-out episode that proves, 10 years on, The Walking Dead can still deliver with a punch.

Goriest moment: Alpha’s throat being cut by Negan, emphatically putting an end to her chokehold on our survivors, the Whisperers and The Walking Dead landscape itself.

Laying the groundwork for Negan’s shocking arrival four episodes later is our heroes’ ill-advised nighttime attack on a Saviors outpost, staged in the mistaken belief that they’d be able to swiftly wipe out their newfound foes in one fell swoop. Director Nicotero strikes again with this slickly-shot and stylish episode, especially considering that it descends into one big violent gunfight, but hey — that’s precisely the kind of intense set-up The Walking Dead so often thrives on.

Goriest moment: The bloodbath Glenn and Heath discover after they manage to rack up bodies upon bodies of Saviors by shooting blindly through a door.

Remember when Carl had to put his zombified mother out of her misery after she died from giving birth to his sister in an abandoned prison? Only in The Walking Dead! This heart-wrenching moment in the series occurred in one of those pulsating episodes where two major characters met their end, walkers were everywhere you looked and plenty of tears were shed on both sides of the screen — especially by Rick, aghast at learning from his son how Lori had met her end.

Goriest moment: An already-bitten T-Dog’s heroic sacrifice, yelling “GO!” to Carol to escape as he’s having his throat literally ripped out by a hungry walker. Grim.

“Uh guys?” poor, sweet Glenn asks as ‘Pretty Much Dead Already’ opens. “[The] barn’s full of walkers.” Yes, Hershel’s combined sense of mercy and naive denial over the world going to shit has led him to jam-pack his barn with a small army of the undead, much to the horror of Rick and the gang. Hot-headed Shane is intent on eliminating the occupants, though, and he gets his wish following an edge-of-your-seat confrontation with Rick where he smashes up the barn doors to unleash hell on its inhabitants — complete with an “oh shit!” moment thrown in right at the very end.

Goriest moment: The brutal walker slaughter Shane instigates is classic Walking Dead shock-and-gore, and it’s made all the more horrific by the sight of a zombified Sophia —Carol’s young daughter, who’d been missing until that point — staggering out of the barn last. Rick is the one to put her out of her misery.

The Governor was a fine Walking Dead villain, but he was never going to stick around for the long run (hi, Negan). David Morrissey’s character signed his own death warrant by killing Hershel in cold blood, throwing Rick’s tentative offer of cooperation out the window in the process (see above). Our survivors and The Governor’s people then engage in a bloody battle that ultimately spells the end for both the eye patch-wearing antagonist and the claustrophobic prison setting — but what a way for both to bow out.

Goriest moment: The Governor butchering his job of beheading poor old Hershel while his screaming children watch on.

A remarkably affecting piece of television in its own right, ‘The Grove’ is one of those gut-wrenching Walking Dead episodes that stays with you for weeks, months and, apparently, years afterwards (six of them, to be precise). Carol, Tyreese, Lizzie, Mika and Judith — an unlikely squad for such a seismic episode — grapple with hefty issues of life, death, mental instability, murder, morals, the distinction between dead person and reanimated walker, nature vs. nurture and so much more over its exhausting 43 minutes. It’s the kind of morality questioning episode where you find yourself responding to the sight of Carol killing Lizzie for her own good with a “yeah, fair enough.”

Goriest moment: A grinning Lizzie standing in front of Mika’s dead body (with baby Judith next in her sights) with her hands covered in blood, promising that what she’s done is OK because her sister will “come back”. Shudder.

The Walking Dead’s series premiere is still a gripping watch 10 years on. After waking up from a coma in hospital to be greeted with the arrival of this nightmarish age of the zombie (a familiar apocalypse reveal to 28 Days Later that Walking Dead comics co-creator Robert Kirkman insists was purely coincidental), an understandably dazed and startled Rick sets out with us on The Walking Dead journey. After meeting and learning walker 101 from Morgan, Rick heads into Atlanta where, naturally, all hell breaks loose as he’s forced to take shelter inside a tank to evade his first-ever horde of the undead. Welcome to the new normal, Rick…

A perfect Walking Dead season-opener (sorry, ‘The Day Will Come When You Won’t Be’). Mere moments from being slaughtered by Gareth and the Terminus residents, Rick, Glenn, Bob and Daryl’s bacon is saved by a heroic one-woman assault on the cannibals’ base by Carol. This breathtaking takedown is practically cinematic in its production and direction (hats off to Nicotero once again!), decisively resolving the season four cliffhanger, putting our heroes back on the front foot in a classic battle of good vs. evil and quickly earning the affections of Walking Dead fans all over again.

Goriest moment: That graphic scene of the systematic butchering of people that’s being carried out by the ice-cold Terminus inhabitants is enough to put your off your own dinner. Seriously, don’t watch this one while eating.

Previously crowned by NME as The Walking Dead’s high point, ‘No Way Out’ still stands up as the series’ best episode. Exploding into life just four minutes in when Daryl lights up a group of Saviors with the help of an RPG launcher, that stunning pay-off is a mere starter for the dramatic feast that follows. The narrative switches to a walker-overrun Alexandria as three characters get the chop in shockingly quick succession, Carl loses an eye, a hostage situation is resolved and our heroes reunite to take down the invading walker horde in swashbuckling fashion. If only it was like this every other week on The Walking Dead, eh?

Goriest moment: Sam, Jessie and Ron all being gorged upon by walkers, the latter having signed off from life by mistakenly shooting Carl in the eye — all within the space of four chilling minutes.