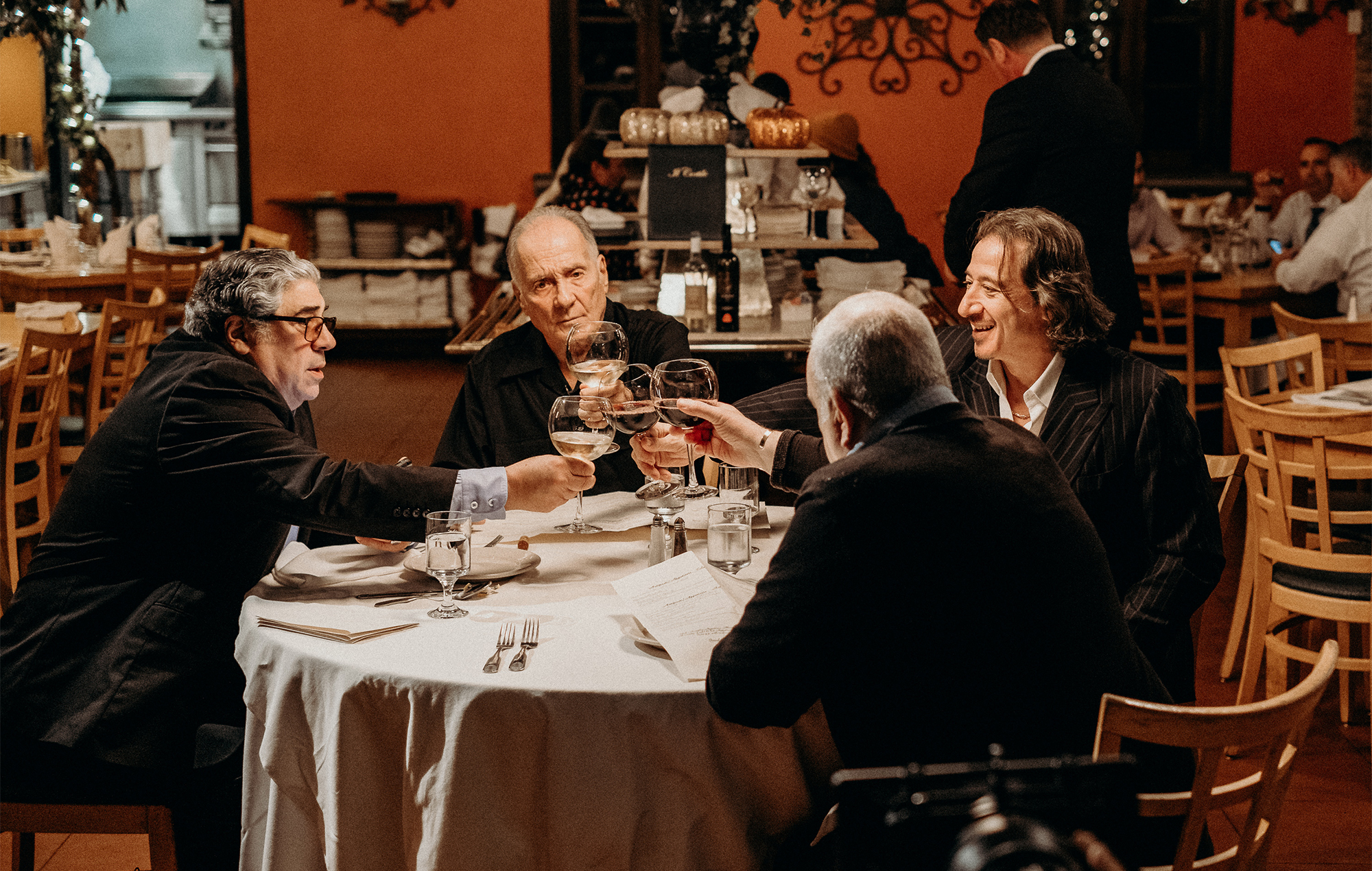 Glance over a lockdown watchlist in 2020 and beyond a shadow of a doubt you’ll find The Sopranos nestled near the top. For devout fans wanting to revisit the mob-riddled underbelly of New Jersey to stragglers who never found the time to commit, the DiMeo crime family have proved a surprising yet much-needed outlet for a bleak year. Speaking with NME, Federico Castelluccio, who played Tony’s loyal associate Furio (until he fell in love with his wife), says that a different wave of fandom has found him of late.

“I’ve had a lot of younger audiences come up to me and say, ‘You know when I was a kid, my parents didn’t allow me to watch [the show] because there’s a lot of violence in it’,” Castelluccio says. “And now they’re the fans who have had an opportunity to view it during lockdown.”

Castelluccio is one of four cast members to feature in a new documentary on the show – My Dinner With Alan: A Sopranos Session – that arrives at a fitting time for this bump in popularity. The film – a sprawling three-chapter homage from non-fiction filmmaker Kristian Fraga – also includes a coveted interview with creator David Chase by authors Alan Sepinwall and Matt Zoller Seitz, who co-wrote companion book The Soprano Sessions. Zoller Seitz sees no coincidence between the rise of viewership and the current state of America.

“The main reason for the resurgence of interest in the show is that David Chase was right,” he confirms. “When the show came on in 1999, it seemed very bleak and cynical. Then less than two years after the premiere 9/11 happened, then we got embroiled in two wars, mismanaged Hurricane Katrina, experienced a financial crash, and the last four years have been even worse. If anything, he may have been a bit too optimistic.”

The Sopranos was never a show that was going to go out quietly. After its final seventh season notoriously ended abruptly in the summer of 2007, its legacy has lingered in Zoller Seitz’s words as “one of the definitive works of American popular culture, not just for what it said about the country, but for the way that it rewrote the rulebook for how stories are told.”

Last year, Castelluccio and three superfans of the show launched a Sopranos convention in New Jersey, a two-day event that was billed as “for the fans, by the fans’. Its success overwhelmed the Naples-born actor: “We thought that maybe 400 people would turn up to this event, but we got 15,000,” he marvels. “They flew from Australia, from London, everywhere. It told me that the fan base was still alive and doing well.”

The DiMeo’s story will be reaching screens again in 2021 in The Many Saint of Newark. Starring James Gandolfini’s son Michael as a young Tony Soprano, the film charts the formative years of the boarish mobster, and is co-written by Chase. The topic of the film arises in the documentary’s mid-segment, in which Castelluccio, Vincent Curatola (Johnny Sack in the show), Arthur J. Nascarella (Carlo Gervasia) and Vincent Pastore (Salvatore ‘Big Pussy’ Bonpensiero) cheerfully reconnect at an Italian restaurant that they used to frequent while working on the show.

“I wonder if when the credits come up, people realise that none of us are gonna be in this film,” muses Curatola over desert. There’s no bitterness to the speculation, more a curiosity about how their origins will be told, peppered with high praise of Gandolfini Jnr.

Gandolfini’s absence is of course felt in the documentary, not least because of his starring role in the show, but his looming presence and personality. Over a Zoom call with NME, Nascarella and Curatola reflect on their time with the actor, who passed away in 2013.

“I had no idea how talented he was until I saw him after the show in other projects,” admits Nascarella, who compares joining the show in its fourth season to joining the Yankees. “ And I went,’ Holy mackerel, this guy is phenomenal’. I mean, he was an actor. He wasn’t Tony Soprano.”

Curatola – who played underboss Johnny in the show from 1998 – had met the Gandolfini six years prior to them working on the show together. “We met in Marylou’s which is a place where a lot of people used to hang out in Manhattan,” he reminisces. “After years of working with him on the show I could look at his face and know what type of day it was going to be. I saw him many times just laying down on the soundstage taking a nap because he was exhausted. They worked him like crazy, but he was a masterclass in acting.”

There’s an ebullient air to the actors as they speak of their time on The Sopranos. Each had their own journeys within the story; Castelluccio had only been intended to appear in one episode but stayed on for 28, Curatola’s role as Johnny grew as his season count rose. Each also share a favourite scene of theirs that feels like a natural extension of what their characters represented in the fabric of the show. As Furio, Castelluccio played a pivotal role in the inevitable demise of Tony and Carmela after becoming infatuated with the latter.

“There’s this tacit love that they have for each other, but they can’t express it,” he explains. “One of the scenes that still stays with me is when Furio comes back from Italy and has nothing to give her, so he has to improvise and hand her over some balsamic vinegar. There was a great connection in that scene.”

Johnny’s journey would see him rise from underboss to the boss of another crime family, the Lupertazzis, before being sent to prison. For Curatola, it was Johnny’s final scene that stuck with him above all else: “For his death I went to some very strange places,” he says of his character’s battle with cancer. “The episode took three weeks to film, and I went through some real changes. But when he’s looking up from his hospital bed and saying: ‘Ma, ma, ma’, that was it for me.”

Those involved in The Sopranos know that its legacy doesn’t end here, with a feature-length documentary and a prequel movie. “Honest to God, I’m going to be dead for 100 years and they’ll still be talking about The Sopranos,” laughs Nascarella. He announces that he’s just had a great grandson, and before he continues, Curatola congratulates him warmly. “My great grandson is going to be watching this show and saying, ‘Look at that old Italian, that’s my grandfather’s father,” he concludes.

The cast are more aware than anyone that audiences were robbed of any sense of closure when Chase decided to cut off Tony Soprano’s family dinner before they’d even finished the onion rings. Yet their tangible love of the show acts as a salve for wounded fans,  and their appreciation for the experience outshines the murky morals and insecurities that their characters bore.

“I look at it like a famous piece of artwork, like a Rembrandt or whatever,” says Curatola as a final thought. “I feel that this is something that’s just gonna always be watched and be enjoyed the way you would look at a 300 year old statue or painting. Yeah, that’s how I feel about this.”

My Dinner With Alan: A Sopranos Session is a one-night-only event, streaming exclusively on DICE on the 27th December at 8 PM. Virtual doors open at 7 PM. To book your tickets now, click here.